Máxima's engagement ring. Source: Pinterest. First of all, we would of course like to delve deeper into Máxima's one and only engagement ring. King Willem-Alexander had a beautiful engagement ring made for his future wife by the jewelry house Steltman. The ring is made of white gold and contains an oval cut orange diamond as a showpiece. Colored diamonds are very rare and precious. The unique diamond is surrounded by two emerald cut diamonds, which in turn are surrounded by smaller diamonds. The choice for an orange diamond is of course to be expected. It refers to the color of the Huis van Oranje-Nassau and the color of the Netherlands, a beautiful and symbolic gesture. The engagement ring was first seen on March 30, 2001, the date of the engagement, and since then we have rarely seen the Queen without this beautiful piece. Máxima's chain bracelet. Source: Pinterest. A piece that we see Máxima with almost every day. This is of course due to the emotional value behind it. For her 40th birthday, Máxima received this beautiful bracelet from King Willem-Alexander and her daughters. It is a gold bracelet with chains and colored gemstones as you can see in the photo. The colors of the stones refer to the months of birth of her family members. The corresponding names are engraved under the stone. What a wonderful gesture, don't you think? Jewelry from Bigli. This bracelet is reminiscent of Bigli's jewels. Bigli is a brand that we offer that is known for its many curves, colored gemstones and different gold colors. Bigli is definitely recommended for jewelry in the style of Queen Máxima's iconic bracelet. Máxima with the sapphire diadem left without the plume and on the right with the plume. Source: Pinterest. You will most likely recognize this impressive diadem from the day of the inauguration when Máxima wore it with great confidence

The history of the diadem takes us back to King Willem III. This beautiful masterpiece was designed by Oscar Masin, a famous jewelry designer of the time. There is some uncertainty about who actually made the jewel. What we do know for sure is that the diadem was a gift to Queen Emma. In fact, the jewel contains 655 diamonds and 33 Ceylon sapphires. The original diadem consisted of three parts, so that the middle part could be worn like a hair comb.

From Emma to Juliana

In 1928 the diadem was taken to a jeweler for some adjustments to make it easier to wear, as the piece weighs about 700 grams! Unfortunately, these adjustments made it impossible to wear the middle part as a hair comb. Six years later, in 1934, Emma dies. Before her death she decides that the sapphire diadem belongs to Princess Juliana. (Side note: Queen Wilhelmina was never seen with the jewel because of the choice for Juliana.) After Juliana, Beatrix wears the diadem with great pride.

From Beatrix to Máxima

In 2013, the jewel was brought back to a jeweler to make some adjustments for Queen Máxima. For example, the jeweler removed the plume from the centerpiece and replaced it with one brilliant. He also made the frame slightly higher and wider, so that the weight is even better distributed. We were shown the result on the day of the inauguration of King Willem-Alexander. After the inauguration, Máxima wore the jewel twice more, but in the original version. Necklace with sapphires and diamonds -The Sapphire Statement- from our last chance collection. Sapphires are of course beautiful gemstones and we at Royal Coster Diamonds offer them in many shapes and sizes. We have something with sapphires for every piece of jewelry. If you want to go for something big and unique then we have the perfect necklace for you. With this statement piece you can pass off as a royal, this piece is available from our Last Chance Collection at a great price. Máxima with the Stuart Diadem. Source: Pinterest. We have already highlighted a diadem for you, but it really couldn't be missing. The Stuart diadem is known for containing the largest diamond in royal possession. The diamond is almost forty (!) carats. Doesn't the piece look stunning on our Máxima? 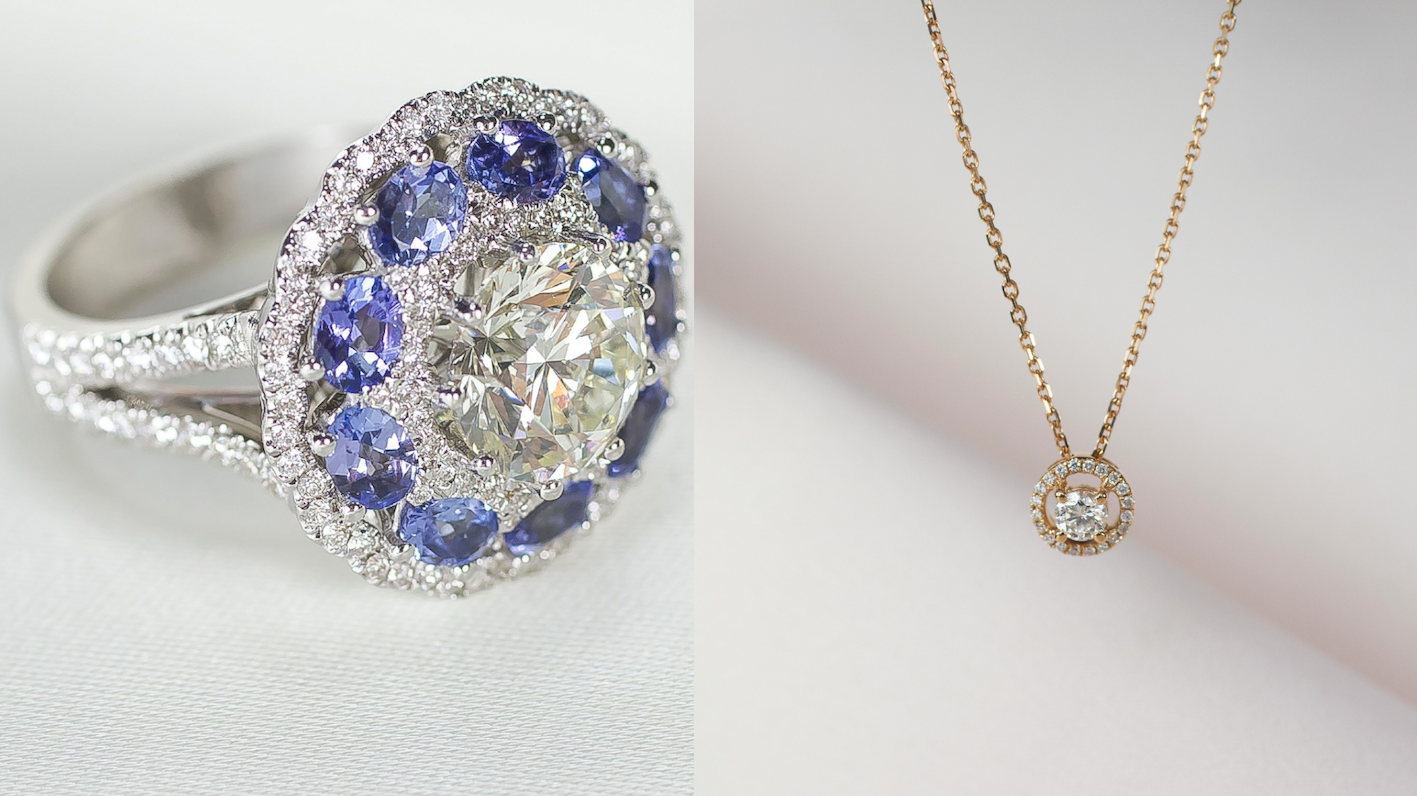 A diamond ring and necklace from our collection. Are you looking for something as sparkling as this diadem, then you've come to the right place. We have an extensive collection of diamond products as well as loose diamonds. Above we have highlighted some products that will provide a lot of sparkle!

The ruby flower earrings. Bron: Pinterest. These earrings are absolutely stunning. They contain more than a hundred diamonds and six large rubies, very precious and unique! The design is in the shape of a flower and they sparkle beautifully on her ear. A big advantage of these eye-catchers is the fact that they can be disassembled. In the photo on the right we see Máxima with one flower, beautiful studs to wear during the day. The earrings as a whole, with three flowers are perfect for an evening festivity. 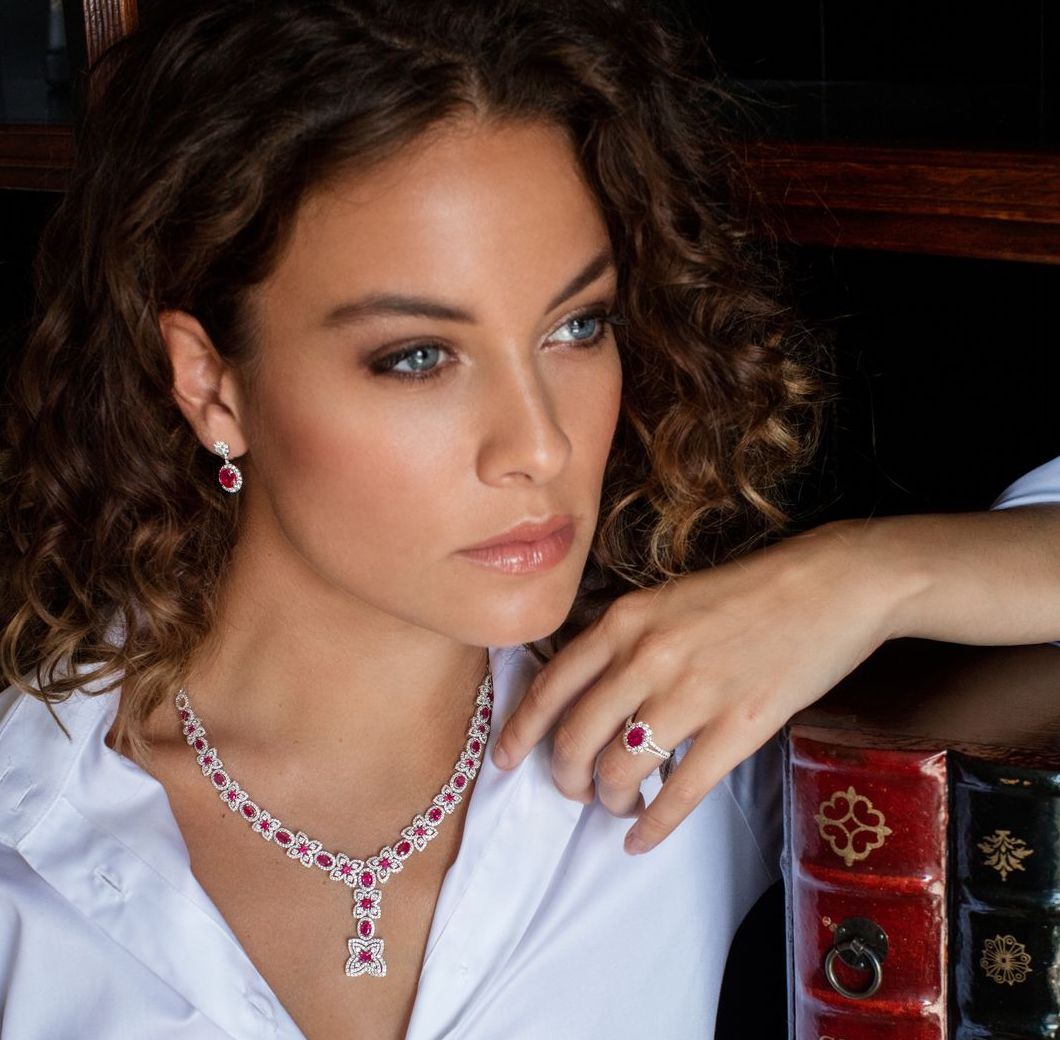 Diamonds and rubies jewelry from our collection. Rubies are, again, beautiful gemstones. We have of course also used these gemstones in many jewelry pieces, you will probably be able to find comparable earrings with us. Because let's face it, what is a nicer combination than rubies with diamonds, we are a fan. We also offer a collection of detachable earrings, such as Day & Night earrings. 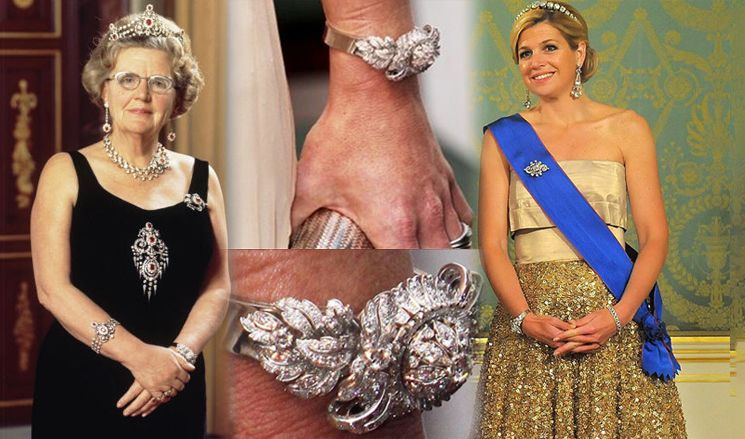 Left: Queen Juliana and on the right: Queen Máxima. Both wearing the diamond watch. In 1959, Queen Juliana celebrated her 50th birthday. The Dutch population collected money for a joint gift: a beautiful diamond watch. She was very popular among the people because of her looser style. For example, she insisted that she be addressed as Madam instead of Her Majesty. The diamonds on this watch were cut by our previous CEO and master polisher: Ben Meier.

Where did the diamond watch go?

However, when Juliana's eldest daughter, Beatrix, became queen in 1980, we did not see the diamond watch for quite some time. It was believed that Queen Beatrix followed strict etiquette: it was not appropriate to wear a watch on a royal occasion. Fortunately for its admirers, Queen Máxima - the wife of our current king, Willem Alexander - introduced the watch in 2006. Since then she has been wearing it regularly on several occasions. To this day it still makes us a little proud every time we see those diamonds sparkling on her wrist! 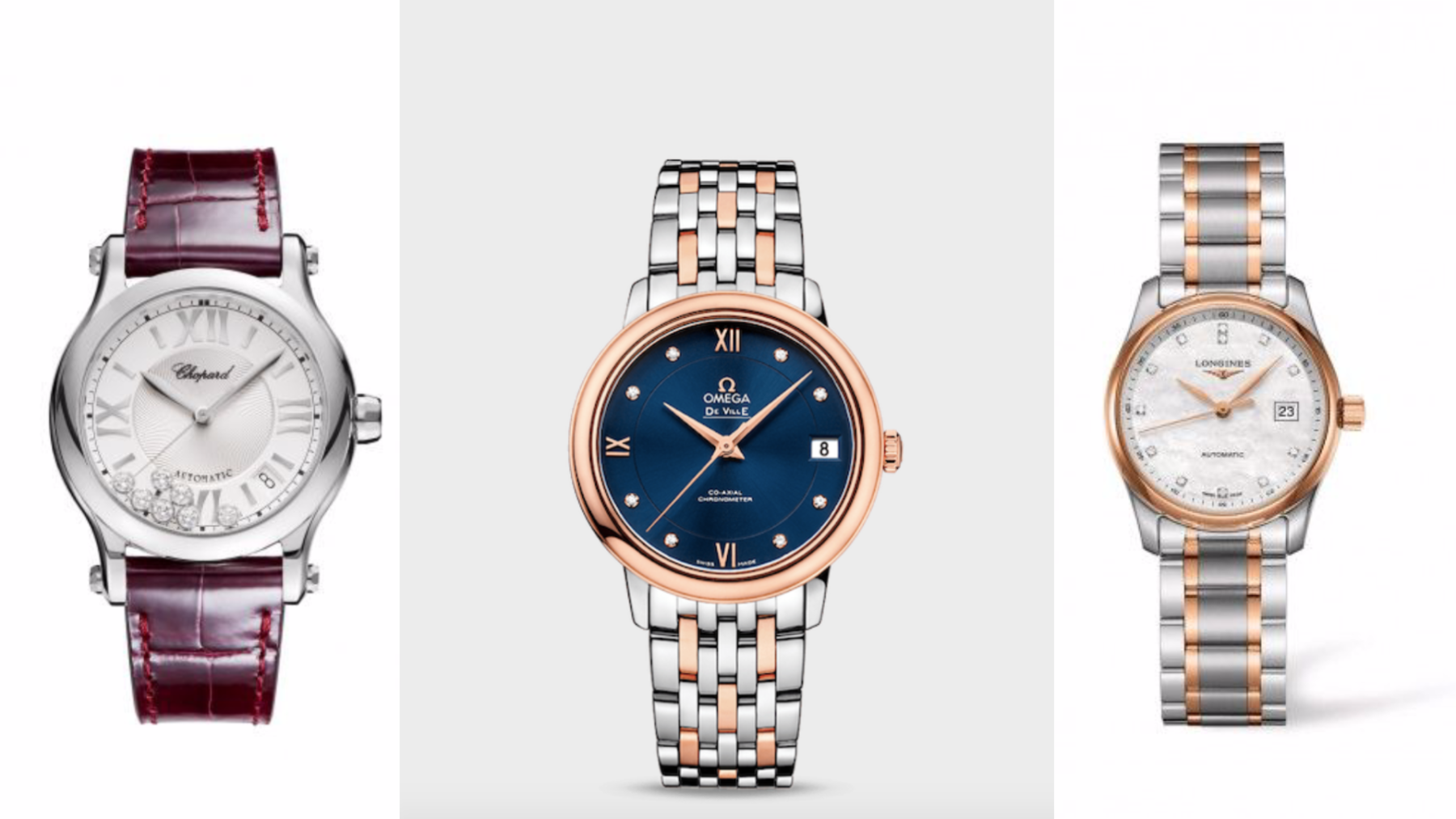 Watches from left to right: Chopard, Omega, and Longines. We offer a wide variety of watches, we sell brands such as Longines, Omega and Chopard. In addition, we also offer our own brand watches. Be sure to visit our 18th-century villas to view the entire collection of watches.

The Netherlands has a long history of kings and queens. As Royal Coster Diamonds, we have always had a warm relationship with royals from all over the world. Based in Amsterdam, The Netherlands, the connection between Royal Coster and the Dutch Royal House is one that we deeply cherish. If you have become curious about royal jewelry and/or the diamond world, be sure to book a Royal Experience tour!
Link copied!
Tweet Share Pin it
Previous post