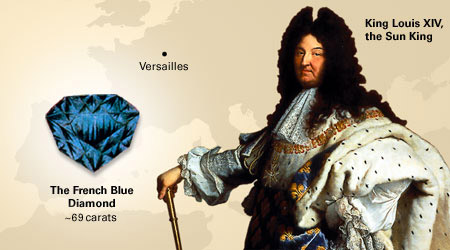 The French Blue of the French Royals

For over 120 years, the blue diamond was in possession of the French Royal House. The diamond shined in various types of jewelry for Louis XIV, XV and XIV. To everyone, it was quite clear that this was a very special diamond. Therefore, it was only worn to important ceremonial occasions. When it wasn’t being worn, the piece of jewelry with the stone was closely guarded. During the French Revolution, Louis XVI and his wife Marie-Antoinette tried to flee the country. By this time, all royal jewelry were transferred to the French government. In all the revolutionary chaos, the blue diamond wasn’t guarded as well anymore. During some week-long lootings in 1792, the “French Blue” was stolen.

About 20 years later, a dark blue stone appeared in London. The diamond weighed around 45.54 carats and was owned by diamond dealer Daniel Eliason. However, the stone was recut and reduced in size. It was therefore not 100 percent sure that this was, in fact, the French Blue. In 2008 the case of this blue stone was investigated it indeed turned out to be the French Blue Diamond. Eliason sold the diamond to the English King George XIV. King George was known to be a big spender. Therefore, after his death, the stone had to be sold to a private individual to pay off the King’s debts. 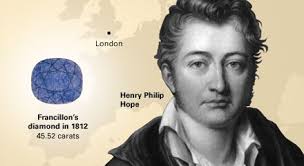 When the diamond was sold, it disappeared again for a couple of years. However, in 1939 it’s back in the spotlight when Henry Philip Hope buys the diamond. He decided to call this stone the “Blue Hope Diamond”. The diamond remains in the Hope family for over half a century. Unfortunately again the diamond needed to be sold to pay off debts. Over the years, Blue Hope has been to places all over the world.

The Blue Hope in a new setting

Everyone who saw the diamond immediately fell in love with it. The same goes for Mrs. McLean from Washington. She absolutely adored the diamond when she first laid eyes on it in 1910. However, the setting of the diamond did not please her. The owner at that time was Pierre Cartier. He decided to put the stone in another setting and leave it at McLean’s for the weekend. This appeared to be a clever move: after the weekend Mrs. McLean bought the diamond. She decided to put the Blue Hope into a diamond necklace. This is the same setting we still see it in today. Until her death at the age of 60 in 1947, Mrs. McLean owned the diamond. 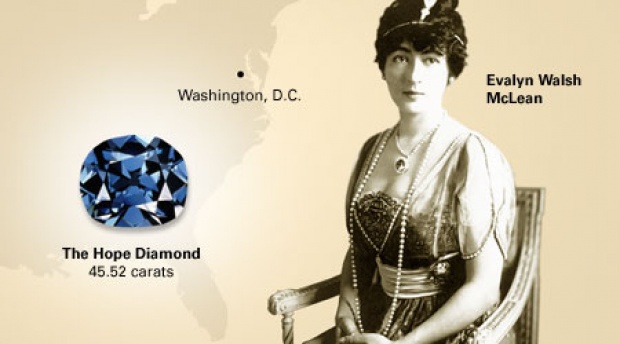 The Blue Hope on exhibition

In the next ten years, the Blue Hope Diamond was regularly exhibited by the new owner. In 1958, he donated the diamond to the Smithsonian Institute, the National Museum of Natural History in Washington. Once here, the blue diamond instantly became the main attraction of the museum. Since then, the diamond has only left its new home a few times. This was just for exhibitions, cleaning and small restoration works.

Facts of the Blue Hope Diamond

Because the Blue Hope was cut and polished so many times and moved so often, it had to be re-classified. The Gemological Institute of America re-examined the diamond:

Carat of the Blue Hope

When the French trader bought the blue diamond 350 years ago, is weighed 112 carats. After hundreds of years of grinding, cutting and polishing, the stone now weighs 54.52 carats.

The color of the Blue Hope

One of the most special features of the Blue Hope is definitely the color. Tavernier described the color as violet. However, later the stone was labeled blue. This is due to the high concentration of boron that the GIA discovered. When the stone is under UV light, it turns red. After a few seconds, the diamond turns back to its own beautiful blue color. The boron in the diamond absorbs the colors red, orange and yellow. The only color that is left is the color the diamond becomes, which is blue. The more boron, the bluer the diamond. The color of the Blue Hope Diamond is called Fancy Dark Grayish Blue. 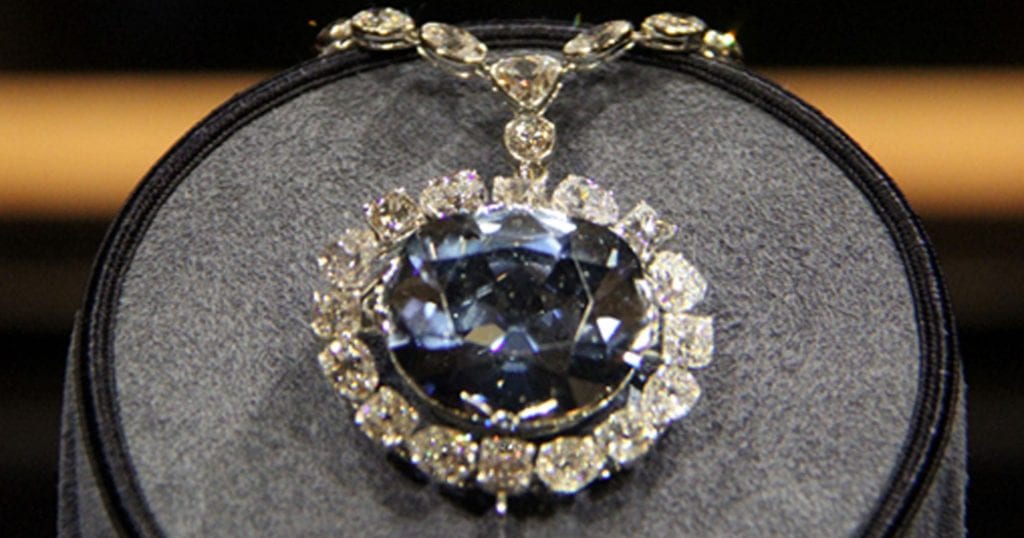 Clarity of the Blue Hope

The purity of this stone is VSI. This means that the diamond has very small white spots and impurities.

Cut of the Blue Hope

The last and current cut of the Blue Hope Diamond is a combination of a cushion and a brilliant cut. At the girdle and the pavilion are (extra) facets added. Though unusual, this is a beautiful cut.

Is the Blue Hope Diamond cursed?

An interesting thing about the Hope Diamond is that many people believe the stone was cursed. Those who look at the history of the Blue Hope closely, see that this diamond leaves behind a trail of (early) deaths, bankruptcies, and divorces.

One of the most distinctive characteristics of the Blue Hope Diamond is, of course, its color. Colored diamonds are always a pleasure to look at. Are you interested in colored diamonds? Then look at them in our jewelry collection. Here you see the most beautiful jewelry with colored diamonds and other precious gemstones. Or contact our diamond consultants if you have any questions.
Link copied!
Tweet Share Pin it
Previous post
Next post