What are diamond inclusions?

Diamonds are formed deep in the earth under great heat and pressure. This formation process takes a very long time. During this formation, most diamonds develop irregularities or imperfections. You could consider these irregularities as birthmarks of the diamond. The amount of imperfections and the size of them varies per diamond. Some have a lot of (big) imperfections. We call these diamonds Pique diamonds or Included diamonds. Other diamonds have very small ones that are nearly invisible. They are often only visible with a 10x magnification. On rare occasions, a natural diamond is without defects. These so-called “flawless” diamonds are extremely rare.

Not all diamond inclusions are the same. Of course, they can differ in size, shape and location. But there are actually many different kinds of inclusions: And finally, there are also man-made inclusions, such as:

A feather inclusion is a fracture, a crack, or a combination of multiple fractures. It is often shaped like the wing of a butterfly or propeller. It is one of the most common diamond inclusions. However, for the diamond polisher, this kind of inclusion can be quite a challenge. If he or she doesn’t polish carefully around the inclusion(s), the crack can tear even more. Worst-case scenario: the diamond is ruined. The name “feather inclusion” was chosen because the (cluster of) inclusions have a white and somewhat feathery appearance. A plus point of the feather inclusion is that is it often invisible to the naked eye.

We call an inclusion a knot when there is a small piece of crystal of a diamond differently oriented from the host crystal. This knot affects the surface of the diamond. With the right lighting and a little magnification, you can see where the knot and the surface of the stone meet. It can look like one of the facets wasn’t properly cut. Usually, knots can be seen by the naked eye. Therefore, they are most often not eye clean.

A pinpoint is a tiny white or black inclusion. It is only a few micrometers in size (one micrometer a millionth of a meter). The pinpoint is the most common diamond inclusion. Pinpoints are difficult to locate so they usually don’t affect the diamond clarity. A cloud thanks its name to its white color and hazy appearance. Tiny clouds aren’t usually a threat to a diamond’s clarity. But big clouds make the stone look hazy and the diamond doesn’t sparkle as much as it should.

Just like a tooth, a diamond can have cavities. A cavity can occur when an internal inclusion falls out of its pocket during polishing. So a cavity is exactly what it sounds like: a small hole. Cavities are usually small. You’ll need a 10x magnification to see them. Therefore, overall cavities aren’t a big problem. Unless oils and/or dirt get trapped in there, then the cavity gets darker. The location of the cavity affects the clarity. One near the crown or girdle of the diamond won’t have much impact on the diamond’s brilliance. But a cavity near the pavilion or under the table can affect the sparkle a lot and therefore the diamond’s clarity.

Sometimes, a diamond worker wants to get rid of a black inclusion. In this case, he can make a microscopic tunnel or tube with a laser. An inclusion has a lower melting point than the rest of the diamond. Therefore, it is possible to vape it away with this laser. The laser drill hole is very, very small: a surgical laser makes the hole merely 100 microns in width. This means the tunnel is thinner than a hairline. When the inclusion is vaporized, there is still an inclusion because of the drill hole. But the laser drill hole improves the clarity of the diamond by a grade or more. There is one side note though: drilling tunnels into diamonds and leaving voids – no matter how small – make the diamonds a bit more fragile.

Inaccurate bruting can lead to a bearded girdle. A bearded girdle is exactly what it sounds like: grey/white fuzzy hair-like lines that are on the inside of the girdle. They extend into the surface of the diamond. A heavily bearded diamond has a blurry appearance. It is a clear sign of a bad polishing technique.

This is a small feather, resulting from a blow on the surface. People also often refer to this as a “bruise”. Just like our skin, a diamond can get a bruise. Not always, but very often, bruises are made by polishers. When a polisher uses a polishing wheel with greater impact – to get the job done faster – he or she can damage the diamond.

When are diamond inclusions visible?

As you know, we use a clarity scale to indicate how affected the diamond it by its inclusions:

Clarity scale of the GIA (gia.edu), in Europe we use the word Pique instead of Included.

Varieties within the clarity grades

There are varieties within the abovementioned clarity grades. Within VVS, there is VVS1 and VVS2. For VS, there is VS1 and VS2. The same applies to SI: there’s SI1 and SI2. For Pique (or I) we have PIQ1, PIQ2 and PIQ3. The size, the location and the color of the inclusions determine whether the clarity grade gets a 1, a 2 or a 3. “Prettier” inclusions get a lower number (e.g. 1), whereas worse inclusions get a higher number.

Which clarity should I choose?

Just like many aspects of a diamond, the clarity you choose is a matter of personal taste. Some people only want the best of the best and don’t want to go below IF. While other people are okay with inclusions as long as you can only see them with a 10x magnification. These so-called “eye clean” diamonds are VS and up.

VS-diamonds and all clarity grades above are quite to extremely rare. But SI-diamonds and Pique diamonds make the bulk of diamonds in the market. Especially SI-graded diamonds are popular because they are more budget-friendly, while they look (almost) clean to the naked eye or casual observer. The kind of inclusions you will find in SI-diamonds are usually clouds, pinpoints or feathers.

Make sure you see what you buy

Especially for SI-diamonds, it is important that you see what you buy. Some SI-diamonds have inclusions that are visible to the naked eye and others don’t. That’s why we always recommend you see the diamonds in person before you make a purchase.

Now you’ve read all about the different kind of diamond inclusions, you may think inclusions are a no-go. But that isn’t necessarily the case. Sometimes, inclusions can be extremely pretty. Especially the so-called “salt and pepper diamonds”. 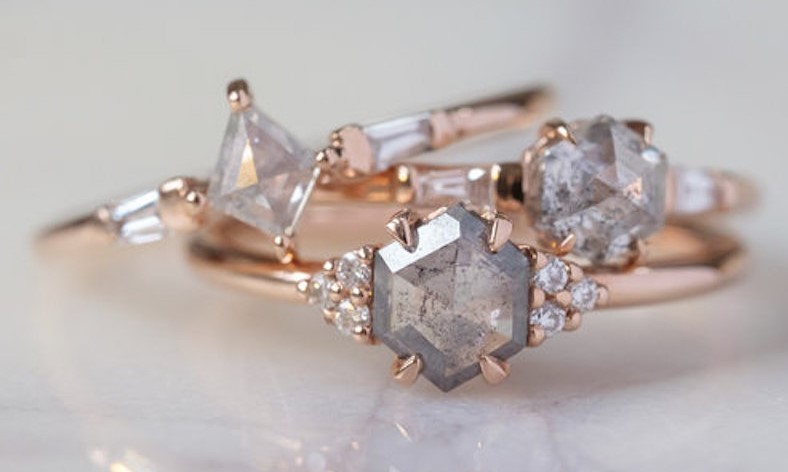 Get your perfect diamond with or without inclusions

At Royal Coster Diamonds, we know purchasing a diamond is a special occasion. That’s why we have highly trained diamond consultants that can help you to find the perfect stone. Whether you are looking for a flawless diamond, an eye-clean one or perhaps a salt-and-pepper diamond. We have it in stock and our consultants are standing by with personal and honest advice. Contact us now for a personalized offer or book a tour to learn more about diamonds and their inclusions.
Link copied!
Tweet Share Pin it
Previous post
Next post